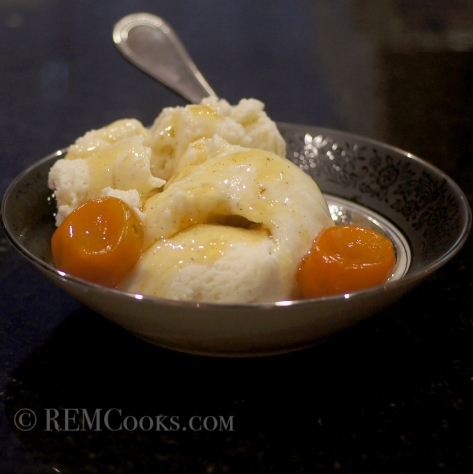 Kumquats. It’s a what? OK, Cumquats. What not? Kumquats/Cumquats. No, I’m not confused. These are the little gold gems of the citrus family. Don’t they look tasty?

The world is full of useless, little known information like there are 4 different species of Kumquats: 1) Hong Kong Wild (Fortunella hindsii), 2) Marumi (Fortunella japonica), 3) Meiwa (Fortunella crassifolia), and 4) Nagami (Fortunella margarita). Brits and Aussies spell it Cumquat whereas in the US it’s spelled Kumquat. When I don’t have a story to tell when I write these posts, I look up little known, useless bits of information for grins and to see if it jump starts the post. At the very worst, I gain information to use at cocktail parties and to prepare myself for Jeopardy. 🙂

Are you familiar with kumquat? They are grown in various states but most of the US crop comes from California and Florida. California kumquats are grown from January through June and are at their peak from March to May. Florida kumquats have a growing season from November to mid-March. Also, the most common variety of kumquat in the US is the nagami which is is oval in shape, 3/4″ to 1″ in diameter and between 1″ to 2″ long. The kumquat used in this recipe is the nagami and if you have never tried one, you’re in for a surprise. You see kumquats, while resembling an orange in appearance, are more like an orange in reverse flavorwise. An orange has a bitter sweet skin/zest and a sweet, juicy inner flesh. Kumquats, on the other hand, are sweet on the outside and tart on the inside. Indeed, they have a sweet, orange flavored skin and a very tart flesh with little juice. You also eat them whole.

Baby Lady loves kumquats. They remind her of Christmas time as a young girl because her mother would buy them and let the girls have them for treats. So overtime we see them, we buy some. They are remarkably versatile. Tired of boring breakfast? Make a kumquat marmalade to brighten up your morning. Because of their high acidity, kumquats make great marmalade. Do you want a little orange zest to add a little zip to a salad? Slice a kumquat into thin rounds and toss them in. They add a nice citrusy bite with minimal effort. You say you need some acidity to a braised duck, pork or lamb? We’ve got your solution. Just drop a few whole kumquats into the braise during the last 30 minutes of cooking. Pretty simple, huh? Dessert couldn’t be easier? Simmer them in a spiced simple syrup until tender. Then serve these softened gold beauties with cheese or ice cream. Of course, the easiest way to enjoy them is just pile them in a bowl and pass them around. These really are delightful little fruit.

When I was at our local market a few weeks ago I happened upon some kumquats. It’s a little late in the season but I knew I had to get some for Baby Lady. So, I bought 2 pounds and brought them home. Typically, we simply eat them out of the bag because they are so good but I wanted to do something fun with them this time. I thought about pickling them because we so enjoy the pickled cherries; however, Baby Lady wasn’t interested in pickled kumquats. 😦 So, I suggested making spiced kumquats instead and this is what we did.

Get a toothpick, skewer, etc. and poke 5 – 6 holes in the kumquats. This allows the seasoning to permeate the skin of the kumquat into the fruit.

1/2 of the clove and allspice

and finally the kumquats.

Bring to a boil

Reduce heat and allow to to medium-low and simmer until fruit has let off its liquid and the skins are knife tender, about 15 to 20 minutes. Remove saucepan from the heat and set aside until the fruit and simple syrup are room temperature and the flavor of the spices are apparent – roughly 2 to 4 hours.

Remember, hot syrup is like napalm. It stays extremely hot and when it gets on your skin, it sticks to it. You can inadvertently burn yourself very easily. While the kumquats and syrup are cooling, add the remaining clove and allspice to a quart jar,

along with the last 2 cinnamon sticks.

Using a slotted spoon, remove the cooled fruit from the liquid and place in a quart jar.

Split the vanilla, scrape the seeds out of the pod and put in the syrup remaining in the pot reserving the pod.

Add the vanilla pod to the kumquats in the jar.

Return the syrup to the heat and reduce until it thickly coats the back of a spoon – roughly 15 minutes more. While the syrup is reducing, pour the  brandy over the kumquats.

When the syrup has reduced, pour it over the kumquats.

Place a lid on top and seal.

These look pretty good don’t they? Now, you have to ask yourself “Am I going to eat all of the goodness in 120 days or less?” If not, then you need to can the little goodies by placing the mason jar in boiling water for 10 – 15 minutes. Once canned they will have a shelf life of 1 year. Once you taste these little goodies, however, you will realize that a single batch (1 quart) will never last over 120 days and not bother canning them. 😀 Enjoy.