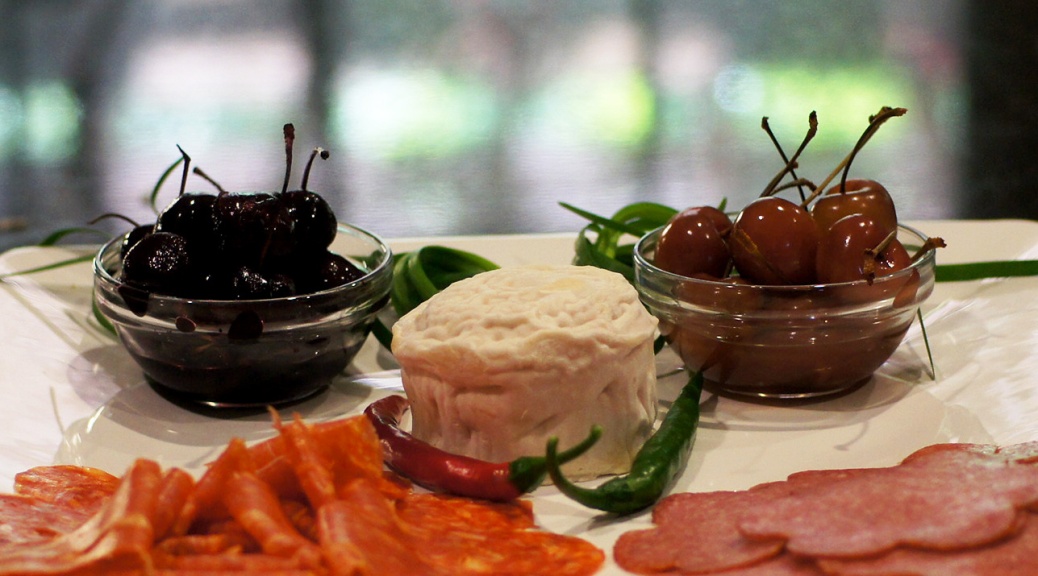 Yes, you heard me right. Pickled cherries. Sweet and sour with the nice cherry flavor that always comes with cherries. If you like cherries, you definitely need to give these a try. If you like pickles, you need to try these. Same if you like sweet and sour. Whatever you like, try these!!! You won’t believe the flavor.

When we were in Portland, Me. 2 years ago visiting Daniel aka Knothead, we went to a nice little restaurant for dinner. Portland has a lot of very quaint, nice restaurants with incredible culinary talent. We bought a Charcuterie plate as an appetizer. When they brought it to the table it was accompanied by cherries. I thought it a little odd because charcuterie is typically accompanied by Gherkins to cut the fat on your palate. Nevertheless, after a few pieces of meat, I bit into one of the cherries and was blown away – it was pickled. It had a wonderful flavor and was a perfect balance to the meat. Everybody at the table loved these pickled cherries. When the waiter came by we asked him to ask the chef if he would give us the recipe. After awhile he returned with a piece of paper with handwritten notes on it. Like most chefs, it was a list of ingredients with no measures and a brief set of instructions. 😮 The waiter explained the chef makes these pickled cherries 3 times per week so there is no reason for him to measure. He just has a feel for what he is doing. We chuckled and I remembered cooking professionally and never measuring anything. It really was sight, feel and taste. We thanked him for sharing and left. We then came back from Portland, got busy doing other things, cherries were no longer in season and the handwritten notes were placed in a “safe place” where they were forgotten.

Recently, I have been in a pickling mood pickling okra, cucumbers and assorted veggies. I really do love pickles. This triggered my recollection of those wonderful pickled cherries in Portland. I commented about them and Baby Lady found the handwritten notes. We again chuckled about the lack of measurements. So, we researched the net to see the various types of pickled cherry recipes were out there to give us a feel to try and replicate these fabulous cherries. Surprisingly, there are a lot of sites with pickled cherries but the recipes are mostly spinoffs (or knockoffs without credit) of Thomas Keller’s pickled cherries. Nevertheless, it gave us an idea as to proportion. So, armed with greater insight to the puzzle, this is what we did.

Add the red wine vinegar to a small saucepan

Next, add the water

Bring to a boil then reduce heat and allow to simmer for 3 – 5 minutes. Now, strain the spices, return the seasoned vinegar to the saucepan and add the cherries.

Allow the cherries to simmer in the seasoned liquid until tender, roughly 4 minutes. Pour into a quart jar.

Cap and refrigerate for 48 hours to allow flavors to fully meld. Serve however you like.

Add the vinegar to the saucepan

followed by the maple syrup

Bring to a boil, reduce heat and allow to simmer for 5 minutes.

Strain the liquid over the cherries

Cover and place in boiling water and can for 12 minutes.

let sit for 48 hours turning the quart jar upside down periodically to keep the cherries submerged in the pickling liquid because the liquid will not cover the cherries. Serve however you like.

NOTES:  These are really wonderful and have great versatility. You can use them like we did at lunch with a cheese and meat plate with a little champagne. It’s a great, lazy Sunday lunch/brunch. You can eat them with a nice seared foie gras like Thomas Keller serves at the French Laundry. You can uses them as an accompaniment with venison or duck. You can serve them with sandwiches. You can even eat them straight out of the jar.

Now, the bing cherries are the preferred cherries. They are a little sweeter with the extra sugar and milder by using equal parts of water and vinegar. Also, by simmering the cherries in the liquid, the cherries release their liquid in the syrup, too. So, you can use the syrup in addition to the cherries themselves.

The rainier cherries are much more sour given the vinegar is not diluted with water. Nevertheless, they have better texture because they have not been simmered even though they have been canned. The sweetness is similar and we could not really taste the maple. Regardless, they are still extremely tasty and are perfect for a charcuterie plate or as a condiment for salads or sandwiches.

We hope you give these a try and like them. 🙂