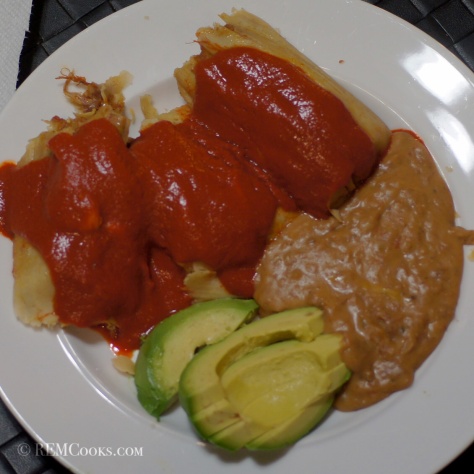 Do you like tamales?? We do. In fact, tamales are one of my favorite meals. Don’t these look good? They are but if anyone tells you making tamales is easy they are either 1) lying, or 2) have been making tamales since they were a child.

We love tamales. Tamales come in a wide variety of sizes, shapes, fillings and wrappings. There are savory tamales with meat, seafood and vegetable stuffings wrapped in corn husks, banana leaves, avocado leaves, or even paper, Then you have dessert tamales stuffed with nuts and fruit. Some dessert tamales are simply sweetened and flavored masa. Dessert tamales are typically wrapped with corn husks or paper. But there is so much more to tamales. In fact, there is a whole lore centered on tamales. Ready for a recipe and a story??? 🙂

Did you know that tamales date back to as early as 7000 BC in Pre-Columbian times? Like the story of the invention of the sandwich, tamales were born out of the need of testosterone filled males to beat their chests and conquer one another.  Conquering similarly testosterone filled males is serious, hard and dangerous work. As a result, it was important to have appropriate sustenance. Corn provided just that. Corn (maize) was a, if not THE, staple crop of the Americas. Like the potato in Ireland, corn was the all important carbohydrate source without which meant famine and the presence of which, even alone, meant that one was fed and contented. Hence, with this backdrop the tamale was born. Tamales could be made ahead and packed, to be warmed as needed. Early tamales were eaten either cold or cooked by burying them in hot ashes making them crispy and brown. As time passed, however, the Aztecs took cues from the Spanish conquistadores and began steaming tamales. Consistent with their superstitious nature (along with their machismo character) when steaming the tamales, the Aztecs believed that the tamal sticking to the bottom of the pot was a sign of good luck which would protect them of the dangers on the battleground. I do not recommend allowing the tamal to stick to the bottom of the pot. Not only does it make the pot difficult to clean but notice the Aztecs are now extinct!!!! 😮 😮 😮 😮

The problem with tamales on the battlefield was it’s a lot of work to make tamales. First you have to make masa. You couldn’t just pop down to the local store and buy masa in a bag. You actually had to make the stuff. This requires time, lots of time. You have to have corn, lime (back in the day they used limestone or ashes) and water. The corn soaks (or simmers) in the lime water mix. The skins turn vibrant yellow. The corn is rinsed and rubbed between your hands to loosen and shed the skin. This is done at least 3 – 4 times leaving you a beautiful, white, corn flesh. But you’re not done. The corn kernels have to dry. Sun drying takes a couple days. Once it has dried, it now has to be milled with a rock (remember, this was before the Industrial Age). It is at this point you can finally make the masa and start the “process” of making tamales. WOW!!! You have already spent 2 days working and not a single tamal has been made. Seriously.

Now, testosterone filled males intent on conquering one another don’t have time for this nonsense. This is why women were taken along in battle. Clearly, they had nothing better to do. So they served as army cooks to make the masa for the tortillas and the meats, stews, drinks, etc. In fact, women were so firmly entrenched in the preparation of masa and tamales that umbilical cords of infant girls were buried under the grinding stone, symbolic of the fabulously enriched future that life would hold for them.

If you cannot tell, tamales are an embodiment of traditions, family, and cultural heritage. Tamales are a little wrapped present that signify the celebration life and corn. You see early Mayan legend tells that God crafted humans from corn. Mud and sticks just didn’t work.

A mixture of yellow and white corn formed the basis for blood, and flesh was made of corn meal dough. The results were “good and handsome men” who were “endowed with intelligence” (Goetz and Morley 168). The race of corn was agile and strong, and they were aware of their creation and grateful to the gods for their formation. So successful were the gods at this final attempt that they worried that the race of corn would equal their wisdom and understanding and become as the gods themselves, so the creators decided to restrict their vision a little. The gods “blew mist into their eyes, which clouded their sight as when a mirror is breathed upon” (Goetz and Morley 169) and so according to Mayan legend, the human race began.

Knepp, M. Dustin, Spreading Tradition: A History of Tamal- making and its Representation in Latino Children’s Literature. Great story, eh? No wonder corn is so ever popular.

As I keep saying and as you will see, tamales are a labor of love requiring a lot of work and time to prepare, even if you don’t make the masa from scratch. You also don’t make “just a few,” this recipe makes 36 healthy sized tamales. Nevertheless, when many people work together, the workload is easily distributed and a good time may be had by all (unless you’re a child and the parents are preparing tamales for friends, you have to assist and you don’t get any). Not surprisingly, tamale making is a family event. Further, nowadays with the frantic work pace and both parents working, tamales aren’t an everyday meal.  Tamales are now considered fiesta food, holiday food or special occasion food. In fact, tamales are the special food of the Day of the Dead (Dia de los Muertos). Also, people are now having “tamaladas” a social event where people get together with friends and other foodies to prepare and eat tamales. It distributes the work and makes for a fun time eating and sampling the margaritas. 🙂

We didn’t have a tamalada because Daniel and Quickstep are generally and intentionally worthless in the kitchen. Daniel and Quickstep simply get the benefit of our hard work. That’s probably a good thing inasmuch as if they weren’t here Baby Lady and I would be as big as the house. 😮 Regardless, Baby Lady and I love tamales and have been experimenting with various masa recipes. This post is the result of our labor. Because a tamale is a filled, wrapped treat, this post will have 2 recipes: 1) the masa; and 2) the filling. You will also notice a difference between Baby Lady cooking and me. I measure everything out so I can replicate the process; whereas, Baby Lady sprinkles a little of this and that and adjusts for taste.

With all this said, this is what we did.

Now, Baby Lady is the Queen of the crockpot. I have never been big on crockpots; so, if you see a post with crockpots on the blog it is almost assuredly a Baby Lady creation.

Season the bottom of the crockpot with Nature Seasoning

Now add the meat to the crockpot.

Next sprinkle more Nature Seasoning and Oregano on op of the meat (Baby Lady was moving too fast and didn’t think about letting me take a photo. 😦 ) Cover and cook for 6 hours on high heat.

After 6 hours the pork shoulder is fall apart tender and full of flavor. So, break it up.

Add the chile colorado. You want it to be very wet inasmuch as the masa is going to absorb some of the liquid and flavor the tamale.

Cover, set on medium heat and make the masa. Alternatively, refrigerate overnight to let the favors fully meld. Then reheat the following day when you’re ready to make tamales.

Place the lard in a mixer.

Whip until the lard is white, fluffy and spongy, roughly 2 – 3 minutes.

most of the maseca

and the chicken stock.

Beat to incorporate and add the remaining maseca

Continue beating until dough is homogeneous and as fluffy as it can get.

You know the masa is ready if, when you drop 1/2 teaspoon of the masa in a cup of cold water,

To assemble the Tamales

Prepare the steamer – we have a 12 Qt stainless steel stock pot/boiler that has a large steamer basket. If you don’t have a large pot you can buy a tamalera relatively inexpensively ($20-40) at several online merchants. Place hot water in the bottom pan of the steamer (only enough so the water is just under the basket with the tamales and not touching them) and bring it to a simmer. Line the steamer basket with one or two layers of soaked corn husks.

Grab a soaked corn husk with the tapering end away from you. Get roughly 3 tablespoons of masa and spread over the corn husk in about a 2 – 3 inch square, about 1/4-inch thick. Leave a border on the sides of the corn husk 1/2 – 1 inch.

Place 1 – 2 Tbsp of filling in the middle of the masa square.

Fold one side over the top to the point where the masa covers the filling leaving some masa on the remaining side.

Fold the other side over the top so the masa swaddles the filling.

Now, fold the empty bottom end from the bottom up. This will form a closed bottom and the top will be left open.

Place the tamales in the steamer basket. Do not stack them completely vertically as they will plump at the bottom looking a little pear shaped. Let them lean a little.

and steam covered for about an hour. You know the tamales are ready when they come easily free from the husks. They will still be moist.

NOTES:  Finished tamales will stay warm for about 1 to 2 hours in the steamer. They also can be made ahead several days before and stored in refrigerator, well wrapped. They also freeze exceptionally well.

Now if you don’t want to go to the trouble of wrapping tamales but love tamales, then make a tamale pie or a tamale casserole.

To make the tamale pie pictured above, cut a circle of parchment paper that fits the bottom of a ramekin and insert it. Next, spread the masa in the bottom of the ramekin  roughly 1/3 full. Add the filling to the 2/3 level then cover the filling with masa to the top of the ramekin. Place in a casserole pan, fill with water to 1/2 way up the ramekin – This is best done AFTER you put the casserole pan in the oven. Bake at 350 F for 1 hour. Remove, run a knife around the edges to loosen the masa. Turn upside down on a plate and tap on the bottom of the ramekin to release it. Remove the parchment paper circle if attached to the pie, serve & enjoy. These were chicken and salsa verde tamale pie.

If you don’t like the idea of tamale pie, then use a casserole pan. Put 1/2 of the masa in the bottom of the pan, add the filling, cover with the remaining masa. Bake at 350 F for 1 hour. Top with cheese during the last 10 minutes of cooking. It’s delightful stuff. We hope you enjoy.