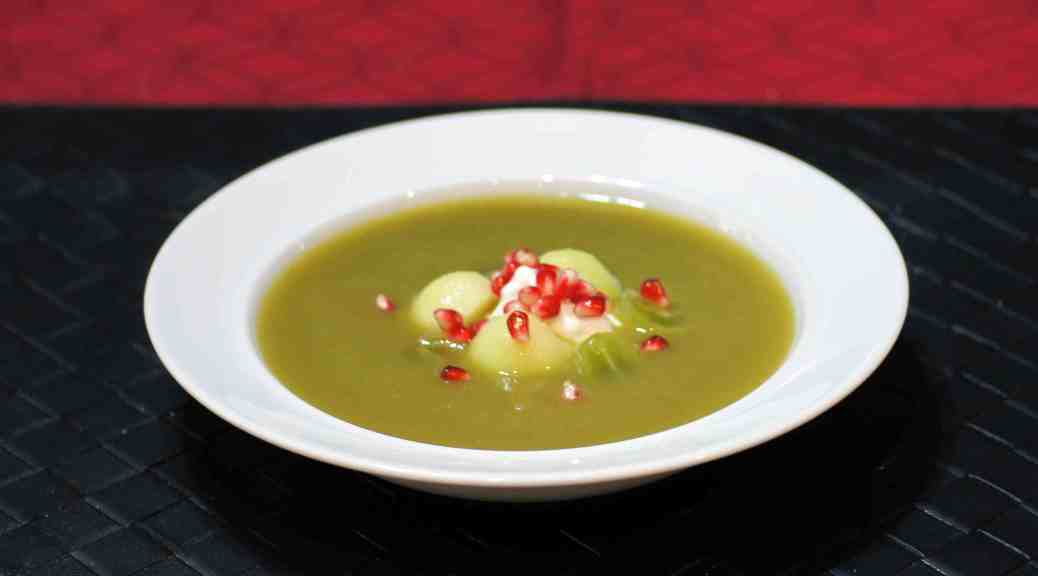 Inasmuch as we’re still roasting in DFW, this is another delicious cold soup. If the weather has cooled where you are, then we’re jealous. So, put this in your recipe book for next summer. It is delightful and very refreshing. You will like this one a lot. 🙂

You would think once September arrived it would start to cool down. Not in DFW. We’re still in the upper 90s with several days roasting around 102+ F. It’s still very much summer here and just hot. Because it’s hot I really have been on a cold soup kick. You really need refreshing meals in heat like this. Thankfully, we still are seeing an abundant supply of fresh, local produce. As a result, we have been hitting the farmers markets most weekends. You just have to go early in the morning because by noon we’re close to 100 F. 😮 After then, you just wilt from the heat.

On our trip to the farmers market last week, they had some very nice melons. Right now, melons are everywhere. Now, Baby Lady loves, loves, loves her some watermelon. She eats it for breakfast, makes watermelon water and even watermelon margaritas. She also loves cantaloupe which is a traditional breakfast item in the summer. While I like cantaloupe and watermelon, I really like honeydew melons. So, I’m always excited when I find nice, ripe honeydew melons. Given it’s melon season, there were lots of melons at the market. They had casaba melons, cantaloupe, watermelons of various kinds and sizes and some really nice looking honeydew melons. Given we had eaten a lot of watermelon and cantaloupe of late, we opted to buy the honeydew this time around and left to do a little more shopping. As we went to our next stop I couldn’t help but think about the nice, ripe honeydew we had purchased. (Yes, my mind really works this way) I was so pleased with the way the cantaloupe gazpacho came out I had decided I would try a honeydew melon gazpacho but was pondering what ingredients to use. So, as I was pondering honeydew melon gazpacho I came across some beautiful white grapes. Grapes and honeydew melons are a perfect combination so I bought some. Next came the English cucumber because you can’t make gazpacho without a cucumber. We then made it home, put up the groceries except the melon, grapes, and cucumber. Then I pondered reality a little more. My mint in the backyard is lovely right now with such a wonderfully clean and refreshing flavor. OK, that would go nicely in the gazpacho. We also had some scallions and celery to make this a sweet and savory gazpacho. Then I saw the 3 beautiful, small red Serrano chiles on the plant and a nice homegrown pomegranate that fell off of the tree. How nice, a refreshingly cold, sweet, savory soup with a little kick and some crunch to it. That’s the ticket. It all began to come together in my mind and this is what we did.

In a blender or food processor, add the grapes

Because the celery has a lot of fibre and the grapes have skins, strain the celery/grape puree through a fine mesh strainer.

and blend to incorporate

Put in the refrigerator and chill at least half an hour before serving.

Pour soup around the garnish