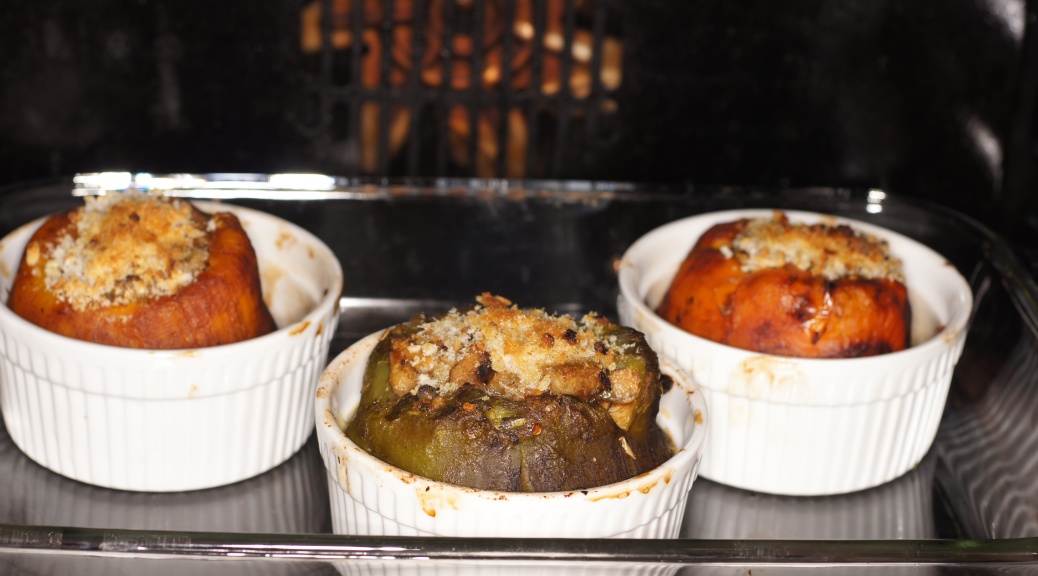 While shopping at our local market this past week they were having a sale on these beautiful yellow and orange bell peppers for $1.00 @. I couldn’t resist so I bought a couple and a nice green one for additional color. You see, I have had this stuffed pepper dish I have been dying to make.

Lately we have been seeing a lot of stuffed dishes. Lydia’s Italian Kitchen made stuffed Eggplant last week. Somebody else was making rellenos. Another person was stuffing tomatoes. So it got me into the mood for some stuffed peppers. We like peppers in a variety of ways, particularly stuffed (i.e. Stuffed Roasted Red Chile a la Richard) and especially chile rellenos. The problem with chile rellenos is they are battered and fried so we try not to eat them very often. Also, Baby Lady doesn’t eat red meat so regardless how good some of the recipes look or sound, they typically have ground beef or sausage. As such, we are always looking at different and unique ways to stuff a pepper. Eggplant and mushrooms are nice substitutes for meat because of the meaty texture so we had been toying with the idea of a stuffed pepper with eggplant or mushrooms or both. Also, we love roasted peppers because of the added depth of flavor and character brought out by the roasting process. So we decided that roasting these beautiful peppers and stuffing them would be a fabulous and different approach to stuffed peppers.  This recipe is what we came up with. Roasting the peppers brings out a sweetness, along with a smokiness, that pairs beautiful with the eggplant and mushroom stuffing.  The eggplant stuffing provides a meaty texture flavored by the tomato, garlic, anchovy and oregano. If you are in the mood for a perfectly vegan meal, or just want to try something different, then this dish is one you should definitely try.

Peel and slice eggplant into 1/2 thick slices. Place eggplant in a colander and set over a bowl or in your sink. Sprinkle generously with salt and allow to sit and drain for 45 – 60 minutes.

While the eggplant is draining roast the peppers. I do it on my outdoor grill but it can be done by charring the skin of the peppers over an open flame (way too messy but this is how Baby Lady does it) or under a broiler. When charred completely around, transfer the peppers to either a paper bag and close the top to let the peppers steam (my preferred way), put them in a plastic bag and close to let them steam (Baby Lady’s method), or put them in a bowl and cover to let them steam. Leave peppers alone until cool. Once cool, peel the skin from the peppers without tearing flesh. Do NOT rinse the peppers under running water as you will wash away a lot of the flavor from the roasting. Carefully pull off stem and scoop out seeds with your finger again making sure to keep the pepper intact for stuffing.

When brown, set aside in a bowl. Add more oil to the pan and continue to sauté the eggplant until all is sautéed. In a large cast iron skillet, 2 batches is all that is needed. Next, add another 2 Tbsp of oil to the skillet and sauté the mushrooms. When done put the mushrooms in the bowl with the eggplant.

Reduce heat to medium and add 1 Tbsp of olive oil the skillet then the tomatoes, anchovies, parsley, garlic, capers, and oregano and continue to cook for approximately 3 minutes. Add the eggplant, mushrooms and 3 tbsp. of the bread crumbs to the mix and incorporate. Continue to cook until heated through, roughly 2 – 3 minutes.

Place in oven and bake until golden, roughly 25 minutes.

Remove from oven. Using a pair of tongs and a serving spoon, gently lift the peppers out of the ramekins and place on a plate. Finish with some finely grated parmesan, if you desire.

Serve with a side of pasta and tomato sauce and enjoy.

2 thoughts on “Stuffed Roasted Peppers with Eggplant and Mushroom Stuffing”