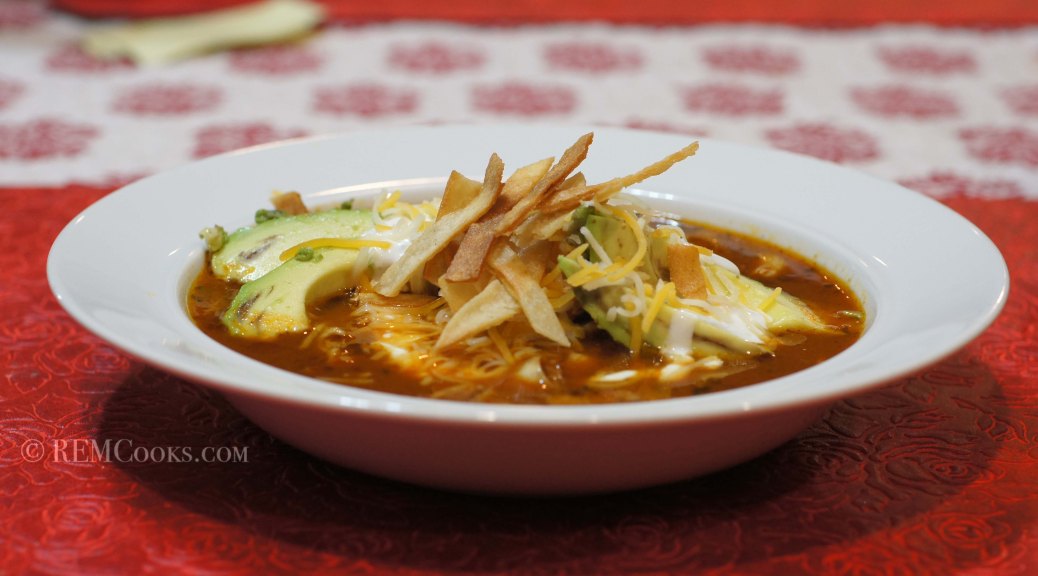 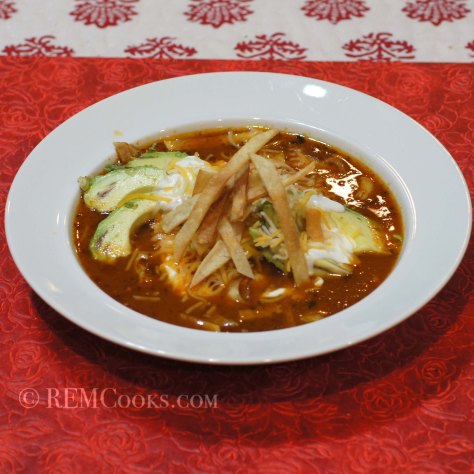 It’s still cold in DFW so we’re still doing soups. We also need to lose the weight we gained during the Holidays. 😮 So, we roasted 3 chickens, obtained 5.5 lbs of shredded chicken meat, took the carcasses and made 7 qts of rich chicken stock. When you do that you know there is some soup in there somewhere. With that much chicken meat and stock you can make a wonderful variety of soups, starting with your standard comfort food – Chicken Noodle Soup. Today, however, it was time for a good old stick to your bones mexican soup, Tortilla Soup (Sopa Aztea de Tortilla) that is.

There is very little available history about tortilla soup. Some trace it to Central Mexico. Others say it originated in Mexico City where it is a favorite. Still others claim its lack of history indicates it originated in the Southwest in the 1960s. My money is on Diane Kennedy, “The Julia Child of Mexican Cuisine.” Ms. Kennedy has studied Mexican cuisine, its lore and history, extensively since she moved to Mexico from Wales in 1957. In fact, in 1981 she was awarded the Order Of The Aztec Eagle, by the Government of the Republic of Mexico for her contributions to the documentation of regional Mexican cuisine. In her book Recipes from the Regional Cooks of Mexico, Harper & Row 1978, while not getting into the history and origin of the dish, she comments that it is quite common in Central Mexico. When I was but a lad of 9 in 1963, I remember eating Sopa Azteca when we traveled in Central Mexico for vacation. You see, Dad, despite being a flight surgeon for the USAF in his early medical career, hated to fly commercial airlines. So, he didn’t. Family vacations consisted of driving wherever he and Mom decided to go. Central Mexico was one of his favorite places. So, somewhere in Mexican lore, in and around Central Mexico, Sopa Azteca de Tortilla came into being. You can believe what you want but this is my story and I’m sticking to it. 🙂

If you haven’t noticed before, there are so many different recipes for tortilla soup. It seems like everywhere you go there is a different recipe. Some people make chicken soup topped with sour cream, fried tortillas, diced tomatoes and diced avocados. Others claim their authentic recipe includes shredded lettuce and green chiles. Still others use ancho chiles and chipotle in adobo. Rick Bayless’ famous Topolobampo has a recipe for tortilla soup using low fat chicken broth and chile powder. Well this is my recipe for Tortilla Soup. Unlike the authentic tortilla soup, I don’t fry my chiles and crumble them into the soup at the end. Instead, like others, I prefer to make a chile paste. I believe the chile paste provides greater depth of flavor. It’s all in your preference. This is mine. Give this a try. We hope you like it.

Drain, place on a paper towel and set aside.

Take the chiles and toast them on a hot comal.

Roast tomatoes under the broiler until blistered.

Put the tomatoes, chiles, garlic and 2 cups chicken stock in the Vita-Mix.

Cook over medium-high heat to blend flavors and reduce the puree to a thick consistency, roughly 8 – 10 minutes. Now add the remaining 6 cups of chicken stock and meat.

Cook another 15 – 20 minutes to let the flavors fully develop.

To serve, place some of the tortilla strips in the bottom of the bowl and ladle soup over the top.

Drizzle crema over the top

NOTES: Traditionally, this is served with lime wedges on the side. Some people like the brightness the lime brings to the soup. Tonight, we had it without lime. 🙂

Also, if you do not have homemade chicken stock and precooked chicken meat, get 1-1/2 lbs chicken breast and 2 qts low salt chicken broth. Dice the chicken, add it to the broth and bring it to a boil. Cook until the chicken is done. Allow to cool. Strain the chicken broth through a sieve, reserving the broth, to remove the cooked grey scum (protein) from cooking the meat.

* Pasilla chiles are NOT ancho chiles. Pasilla means little raisin. As such, many Hispanics in the US have commonly (and incorrectly) called pasillas ancho chile because ancho chiles are wrinkled raisin-like chiles. Pasilla chiles are called pasilla, pasilla negra or chile negro. They are the dried form of a chilaca pepper. Chilaca peppers are a mild to medium-hot, rich-flavored, narrow pepper that can measure up to 9 inches in length and often has a twisted or curvy shape. It turns from dark green to dark brown when fully mature. When dried is is so dark that it looks black, the basis for its name chile negro. So, when you see a recipe calling for pasilla chile or pasilla negra chiles, they are not referring to the dark green poblano pepper or its dried form ancho chile. The ancho chile is sweeter and fruitier in flavor. Pasilla chiles, on the other hand, add a distinctive, slightly astringent flavor to dishes, making them well suited to balancing out heavy stews, rich sauces and soups like Sopa Azteca.