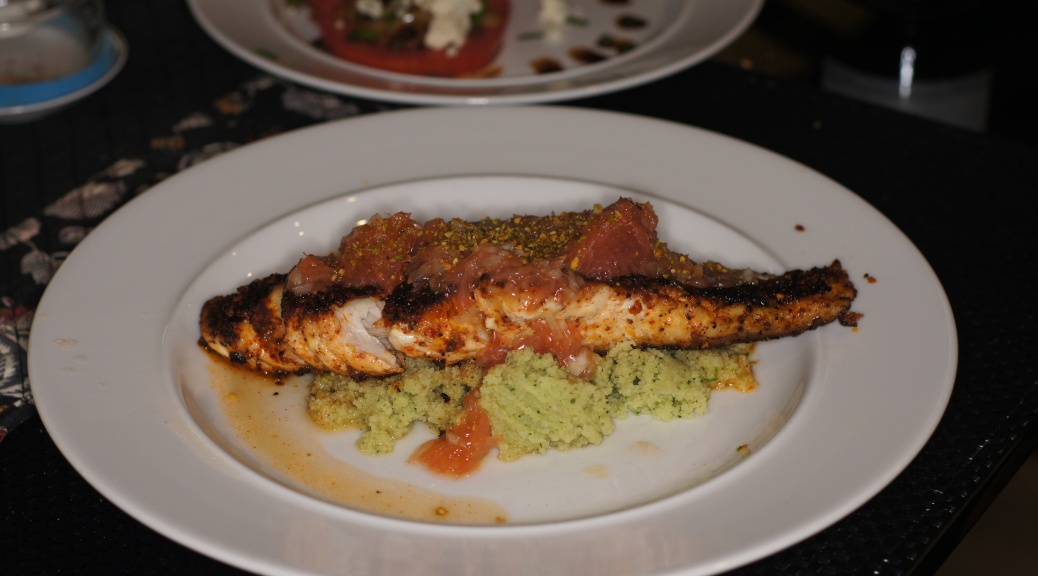 Three times a year Jimmy Springer packs up his family and comes to the neighborhood bringing with him all sorts of delightful fruits and vegetables. You see, Jimmy is a small farmer and wholesaler in East Texas. He has wonderful connections for truly great produce and grows a lot of the produce he sells. Jimmy’s no dummy and realizes he makes more money bringing his produce to the DFW area, as opposed to selling it in East Texas. Tuesday was one of his treks to the big city bringing with him fresh corn, red potatoes (with the soil still on them), large russets, Rio Grande Valley oranges, East Texas tomatoes, fresh broccoli, sweet yellow onions and beautiful Rio Grande Valley Ruby Red Grapefruit. Red Grapefruit is sweeter than the white grapefruit and Texas grapefruit is some of the best there is. Where Jimmy gets his Rio Grande Valley grapefruit we have no idea but it is the best grapefruit we get all year long. We always look forward to Jimmy coming by the house and always buy a case of grapefruit from him. Because we never have enough cold storage space for the grapefruit we keep it in the garage (thank goodness grapefruit is in season when it is still cool enough in the garage to use it as cool refrigeration space) and use it as quickly as possible. Last night’s meal was a Ruby Red Grapefruit inspired meal. Give it a try. We think you will like it. You get the nuttiness from the pistachios, the earthiness from the red chiles and herbs in the green couscous, the acid and brightness from the grapefruit with the smoothness from the olive oil. Delish!

For the Red Snapper

This couscous is from Jacque Pepin’s Essential Pepin that we have been wanting to try. It is modified somewhat from the original recipe because of the fresh herbs we grow and had available. It combined very nicely with the fish and grapefruit.

First, bring some water to a boil in a teapot. Pour approximately 1/2 cup of boiling water into a food processor. Add the fresh herbs and puree.

Once the herbs are liquified, set them aside. Add the butter to a small saucepan and melt. Add the couscous to the saucepan an mix with the melted butter until coated. Pour the herb puree and 1-1/2 cup of boiling water on top of the couscous. Add salt to taste and stir. Cover and remove from heat. Keep covered for roughly 10 minutes. When ready to serve, fluff with a fork, adjust salt and serve.

For the Red Snapper

Place the Shelled Pistachios into a food processor and pulse until finely ground. Add red chile blend and set aside.

Peel and supreme the grapefruit.

Squeeze the juice from the remaining grapefruit pulp. You should have roughly 1-1/2  Tbsp of grapefruit juice.

Cut the grapefruit supremes leaving 4 supremes for garnish during plating. Add the supremes and salt to the olive oil and grapefruit mix and toss gently so as not to break up the grapefruit pieces. Set aside until ready to plate.

Season the red snapper filets with salt. Then add the pistachio red chile crust to both sides.

Heat a non-stick skillet over high heat. Add 2 Tbsp olive oil to the pan. When the oil smokes, add the red snapper and reduce the heat to medium.

Cook roughly 3 minutes on each side (depending upon the thickness of your filets) until done. Cooking it on lower heat for a longer period gives you a nice crunchy crust without burning the nuts.

Take the green couscous and place a mound in the middle o the plate. Take a Red Snapper filet and place on top of the couscous. Put a couple of Grapefruit Supremes on top of the filets and spoon some of the grapefruit olive oil mixture on top. Sprinkle with some ground pistachio nuts. Serve and enjoy!