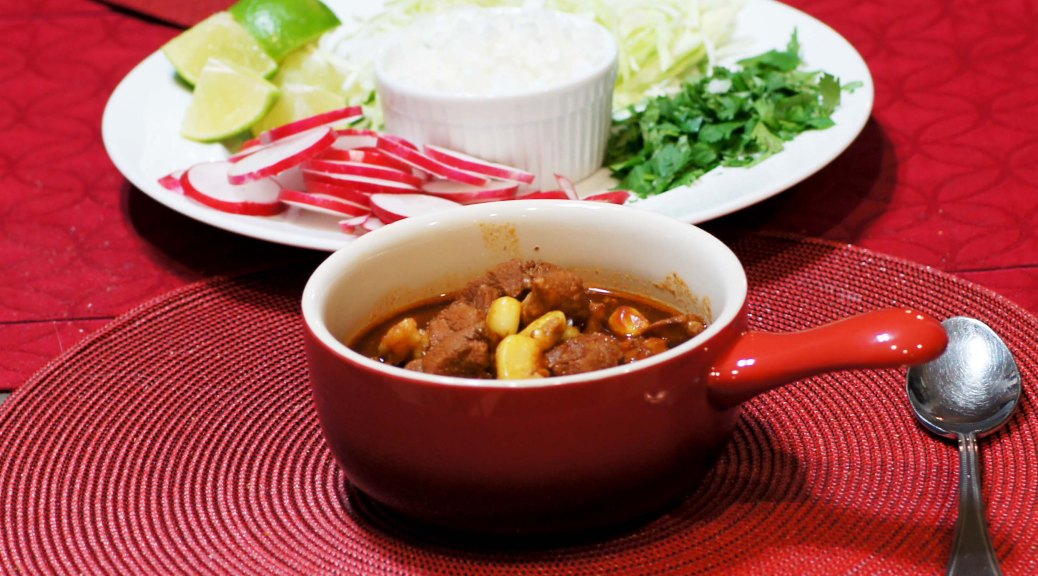 Have I mentioned I love Mexican food? Pozole (Pork and Hominy Stew) on a cold winter day is fabulous. Pozole is a traditional soup that originated in the pacific region of pre-Columbian Mexico. It is a well known cure for hangovers and is often eaten in the wee hours of the morning as a preventive. There is Pozole Blanco (white), Pozole Verde (Green) and Pozole Rojo (Red). Opinions on Pozole run the gamut among Mexicans like Chili with Texans and Gumbo with Cajuns.  Pozole Blanco is colored mainly by the corn. Pozole Rojo adds blended rehydrated red chiles darkening the color adding an earthiness, richer character and depth of flavor. Pozole Verde adds tomatillos, pumpkin seeds, and cilantro. This recipe is a very authentic, traditional Mexican Pozole Rojo (No canned hominy here). I hope you enjoy it.

Cook the corn. Add the hominy corn to a 10+ quart pot.

Bring to a boil, partially cover the pot, and simmer gently over medium-low heat until the corn is thoroughly tender — at a minimum, between 3 – 4 hours. Add water as necessary to keep the water level more or less constant. Slower, longer cooking only means better pozole.

Cook the meat. While the corn is simmering, place all the meats in another large pot, cover with 4 quarts of water, and add 2 tablespoons salt.

Bring to a boil. Skim off the grayish foam that rises during the next few minutes, then add half the chopped onions leaving the rest for condiments at serving. Partially cover the pot and simmer over medium-low heat until all the meat is thoroughly tender, about 2 hours. Remove the meat from the heat and allow the meat to cool in the broth.

Skim the fat from the broth; you should have have 2+ quart broth. Pull the meat from the pork shanks, discard the bones and then chop the meat into 1 inch pieces – there should be about 5 cups meat in all. Cover and refrigerate if not serving within an hour.

Season the pozole. While the corn and meat are cooking, pour boiling water over the ancho chiles to to cover.

Place a small plate or another item on top of the chiles to keep them submerged and let steep for about 20 minutes. Pour the chiles, liquid and all, into a blender or food processor.

When the corn is tender, pour the chile mixture through a medium-mesh strainer directly into the simmering liquid (if you use a Vitamix or another high power blender you can skip the strainer).

Next, add the pork broth and 1 tablespoon salt, partially cover, and simmer for 1 hour.

Add the meat to the simmering pozole and check the consistency.

It should look hearty yet brothy enough to be thought of as a soup or thin stew. If necessary, add water. Taste the pozole and season with additional salt. Be forewarned that hominy soaks up a surprising amount of salt and you may need as much as another tablespoon.

Serve. When you’re ready to serve, set out bowls of the condiments for your guests to add to their steaming, fragrant bowlfuls: the lime wedges, sliced cabbage or lettuce, sliced radishes, cilantro and onion.