One of my favorite foods – Slow smoke barbecue pork ribs. It doesn’t get any better than this.

Yesterday was Memorial Day, a day where we give thanks, remember and honor those brave soldiers who have paid the ultimate price for our freedoms. It was originally established 3 years after the Civil War, in 1868, to commemorate those Union and Confederate soldiers who died fighting the Civil War. These soldiers were commemorated by decorating their graves with flowers. Maj. Gen. John A. Logan declared that Decoration Day should be observed on May 30. After World War I, Decoration Day became known as Memorial Day and was expanded to honor those who have died in all American wars. Then, in 1971, Memorial Day was declared a national holiday by an act of Congress and placed on the last Monday in May, so we could all have a long weekend. Memorial Day also is considered by many as the beginning of summer while Labor Day is its end.

Other than the Civil War, we have been blessed not to have had any wars fought on our own soil. As a result, unless we know someone who perished fighting to preserve our freedoms, we have a tendency not to appreciate the magnitude of Memorial Day. It’s easy to get caught up in the long weekend and the beginning of summer. We fly our flags and maybe put up little flags at some of the fallen soldiers’ grave sites. But we lose track of just how many people have perished fighting for the freedoms we all hold dear. In honoring Memorial Day Baby Lady found and posted the following graphic lest we forget. 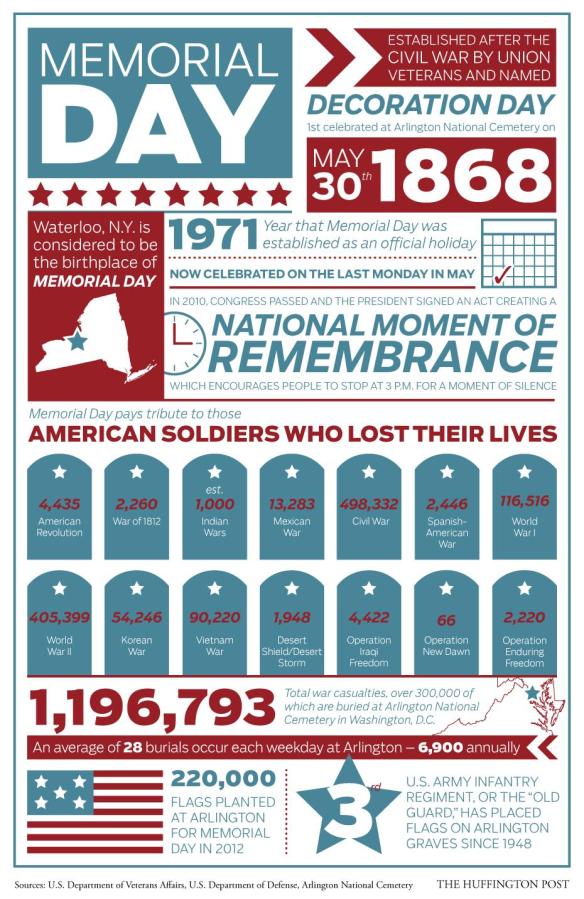 1,196,793 fallen soldiers. Pretty sobering for a 237 year old nation having only fought 1 war within its own boundaries, isn’t it? I am always humbled, honored and saddened that others have paid the ultimate sacrifice for me to enjoy my freedoms; freedom to publish this food blog, freedom to choose my profession, freedom to express my opinions, freedom to elect our public officials, etc. So, in observance of Memorial Day, we barbecued and had Quickstep over for dinner. Quickstep is a veteran of Iraqi Freedom and had several members of his unit perish in combat. He told us about those soldiers he knew who had perished, as well as his efforts to list those from his unit in the 4th Infantry Division, 1st Batallion 44th Air Defense Artillery. Because of their sacrifice, we had a lovely day and enjoyable evening with Quickstep. We are forever grateful and indebted to all of the fallen soldiers.

Add piloncillo or brown sugar to container. I always add the spices to a dry blend blender to mill the spices and better mix them. This is my little Magic Bullet which gets incredible use, especially for small jobs like this.

then add the salt

Blend/mix to incorporate all of the spices. Viola! Here is your dry rub. It makes roughly 2 cups.

Once you have made the dry rub, season the ribs.

Cover the ribs and refrigerate overnight. In the morning, start your fire. I always start my smoker by using natural, oak charcoal with no additives. Remember when smoking that you are cooking in a somewhat sealed chamber and flavoring the meat with smoke. DO NOT USE CHARCOAL LIGHTER FLUID as it imparts a metallic, petroleum flavor into your food. I use a welding torch to start the charcoal and allow it to get to coals before placing the selected wood on top of the coals. In this instance, I used pecan wood because of the sweetness in the smoke. Once the wood is added, wait until the temperature on your thermometer registers 250 F. At this point arrange the racks of ribs in your smoker. Close the doors and walk away.

Obviously, some will be closer to the fire pit than others. I have found through the use of my pit smoker that the temperature variance is somewhere along 75 F difference between the temperature at the built in thermometer and the temperate closest to the fire pit. Controlling your temperature is critical in slow smoking meats. So make sure you learn your smoker. It took me several years to get it down. Now, resist the urge to mess with the food in the smoker. Allow the ribs to bask in the smoke and slowly cook. After about 1 hour, rearrange the ribs placing the ribs in the coolest part of the smoker to the are that is hottest. At some point in the process, typically after 2 hours, the ribs will have shrunk so you can turn them sideways and keep them in the cooler area of the smoker. Continue rearranging/rotating the ribs until they are done, typically 5 hours.

When done, remove from the smoker and allow to rest for 15 minutes.

Serve with your choice of accompaniments and enjoy!

NOTES: * We always have a blend of chiles stored around the house. Typically, we keep a blend consisting of ancho, pasilla negro, New Mexico red, guajillo, California red (Anaheim), and cascabel. You can make your blend anyway you like, however, because the ribs are slow smoked, I don’t include chipotles in the blend as it is lost in the smoke flavors. If you want a little more kick in your ribs, use hot New Mexico red chiles and adjust the proportions to fit your tastes. You can also reduce the amount of paprika and increase the chile blend. If you don’t want to mess with making your own chile blend, substitute store bought chili powder. Be warned, however, that chili powder typically has oregano, cumin, garlic powder and other additives in it.

Now, for those of you who do not have a pit smoker and you want a similar result, substitute smoked paprika (I prefer La Chinata brand that comes in 3 flavors, i.e. sweet, bittersweet and hot). Place each rack of ribs onto separate sheet pan, place in a 220 F oven and roast for 4 hours or so until done. Don’t worry about turning the ribs because all you are doing is slow cooking thereby tenderizing the meat while keeping it moist and infusing the flavor of the spices into the meat. It won’t get you that true wood smoked flavor but it will be darn good. 🙂