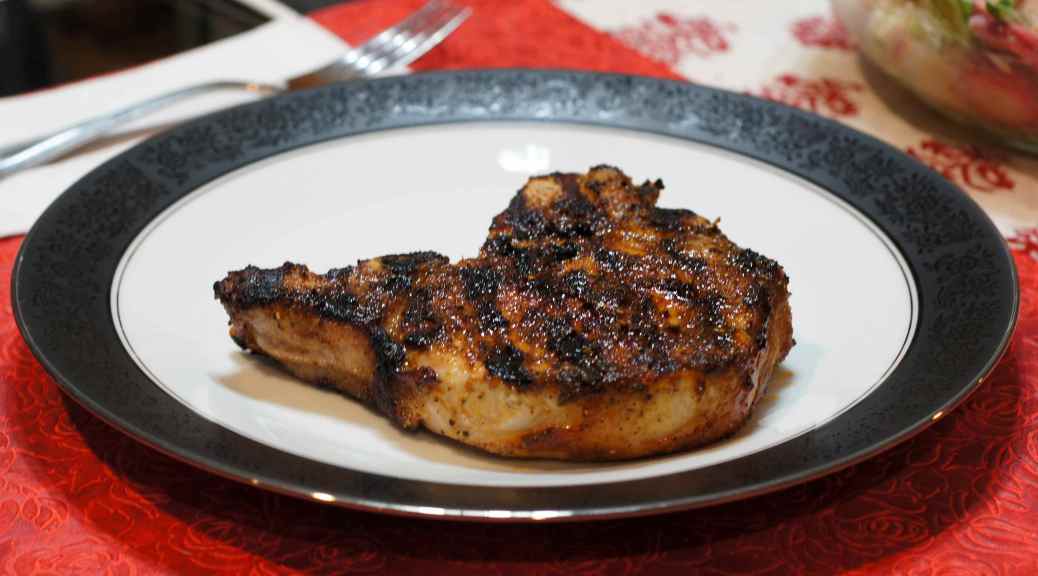 Grilling Season!!!! We really do like to grill outside. With the exception of a few days, the weather has been perfect for grilling. So, when Quickstep came over for dinner we decided to do a little grilling and simple, everyday, grilled pork chops were what’s for dinner, at least that’s what we thought.

Grilling outside can make cooking pretty simple. There isn’t any mess to clean. Brush down the grill, turn it on to whatever setting you desire, slap some meat on it and watch it cook. When it’s done, take it inside and eat. After dinner, go brush down the grill grates and cover it up. Not very difficult at all. You also get that wonderful flavor from the char as it grills. If you cook over wood, you also get the flavor from the wood. There really isn’t anything like grilling.

Typically, when we grill it’s usually fish, chicken or veggies. Occasionally, we grill a little pork. Because Quickstep was coming for dinner, we decided to do some simple, everyday, grilled pork chops. So, I sent him to the market to buy me some pork rib chops. Most people simply call them pork chops. I’ve been eating them all of my life. When Quickstep got back to the house I was surprised to see the package marked “porterhouse chops.” Porterhouse chops???? What in the world??? I knew what they should be, pork loin chops, but I had never heard them called porterhouse chops. Oh well, they would do quite nicely but I still couldn’t figure out the name and was rather surprised by the price.

A few days later I finally got around to looking up pork porterhouse chops to see what was going on. It was then I realized the trickery and artifice being perpetrated upon the consuming populace, Indeed, lo and behold, the porcine industry had undertaken a marketing survey in an effort to improve its image (how can you improve upon the image of bacon?). Allegedly, according to this survey, we pathetic consumers were confused at the meat counter and didn’t necessarily know how to prepare different cuts of meat. So, the National Pork Board (did you even know there was a National Pork Board?) got together with the US Department of Agriculture, Food Safety and Inspection Service and the National Cattlemen’s Beef Association to revise the Uniform Retail Meat Identity Standards (URMIS) program (It seems to me there are too many lawyers and government employees with too little to do 😮 ) All of these efforts are culminating in new labels aimed at linking specific cuts of meat to “proper or recommended” cooking methods. According to the National Pork Board and America’s Pork Producers:

The upshot is this: 14 cuts of pork are getting new consumer-friendly cut names, many that align with already-famous beef names. Here are a few examples:

Joy, oh, joy. All of this just in time for grilling season.!!!! Now I will know how to cook pork by merely looking at the label. Oh, rah, rah, ricky rack!!!!! Make my life simpler. I am eternally thankful and indebted America’s Pork Producers for this magnanimous gesture.

Of course, when you read a little further, you find out the real reason for the change is marketing and profit margins for America’s Pork Producers. Indeed, according to the National Pork Board:

Names have the power to transform the “everyday” into the “extraordinary.” …Names have the unique ability to forge an identity, and you are about to discover the power of a name to re-define pork’s image in the meat case, just in time for grilling season….The new pork names can help you position pork more like beef in your meat case and be rewarded with better margins. Because consumers are typically willing to pay more for higher-end cuts, you can charge more for the Ribeye Chop and New York Chop than you could before the name change. Seize the opportunity to trade consumers up while capturing more of their protein dollar.

I think I’m about to be sick. I hate marketing drivel such as this. Pork Loin Chops are the same as they were before. They still come from the same porcine beast. They are still cut from the same portion of the pig by the same people as before. They are transported to the same markets in the same trucks at the same expense. Now, however, once it gets to your local market a new label is affixed to the pork chop. This new label costs no more than the old label yet somehow because it is a new name on a new label my food bill increased. EVERYTHING REMAINS THE SAME BUT THE LABEL AND PRICE TO THE CONSUMER. So, instead of getting my favorite pork loin chop or pork rib chop at a decent price, they change the name to a Pork Porterhouse Chop evoking memories of fine dining at a steakhouse and with those fond memories they charge me steak prices. Now, due to some marketing wizardry, forever gone are the days where affordable, simple pork chops could be enjoyed by all. So this post is in honor of the simple, everyday, honorable pork chop, a mainstay of family dinners around the country, that has been transformed into the extraordinary, “Premier Pork Chop” through the mere change of its name.

This is what we did.

Allow pork chops to sit for 30 minutes to bring them to room temperature. Meats of this nature will cook more evenly if allowed to reach room temperature before grilling.

While the chops are coming to room temperature, make the seasoning. Add the ancho chile rub to a small bowl.

and last, the crushed, dried cilantro

Mix together to incorporate. Lightly oil the chops and sprinkle seasoning over the chops on both sides.

Place chops on grill over medium to medium-high heat.

Cook an additional 3 – 4 minutes and remove from the grill. This should give you a nice medium pork chop. If you want it medium rare, try 2 – 3 minutes per side; medium well is 4 – 5 minutes per side. Don’t cook it well done. Go eat chicken instead.

When done to your desired doneness, remove from the grill.

Serve with the sides of your choosing and enjoy!