Chile Relleno en Nogada is a classic, traditional Mexican dish. It is a roasted poblano pepper stuffed with a picadillo made of pork, nuts, fruits and veggies covered with a creamy walnut sauce and sprinkled with pomegranates and parsley. Kinda Pretty isn’t it? Tasty, too.

This dish was created in 1821 by the Pueblan Nuns as a festive food to honor a visit from revolutionary general Don Augustín de Iturbide. You see, Mexico had just won its independence from Spain (in a way), Don Augustín de Iturbide was victorious (at least for a little while until he was accused of being a traitor, exiled, returned and executed in 1824 – busy 3 years, eh?) and the self-anointed Emperor of Mexico. Having overthrown Spanish domination it now was necessary to have a flag which Don Augustín de Iturbide created. The red, white and green stripes on the flag are symbolic of the three guarantees of the Plan of Iguala, 1) independence; 2) supremacy of the Catholic Church; and 3) and equality of all of Spanish blood, i.e. the Criollos and the Spanish-born Peninsulares. Notice how this dish has the 3 colors of the Mexican flag? The poblano chile is green, the walnut sauce is the white and the pomegranates are the red. Pretty clever of those nuns.

Regardless of the history of the dish, Chile Relleno en Nogada is a seasonal dish. It is made in late Summer to early Fall when walnuts and pomegranates are available. It is also a very festive dish because it is in celebration of Mexican Independence Day (September 16). Once the walnuts and pomegranates begin appearing at the local mercado, you begin to see the restaurants posting “Tenemos Chiles en Nogada!” (We Have Chiles in Walnut Sauce) banners. Inasmuch as we don’t start seeing pomegranates until mid to late October, Chile Relleno en Nogada is a perfect meal for the holiday season. It is a very festive dish and the colors of the Mexican flag also work beautifully with the Christmas season. 🙂 Because pomegranates will keep whole in your fridge for many weeks (up to 2 months) and we have a pomegranate tree that produced beautifully this year, we had everything to make this dish last night, so, with a little planning, we did.

Like any traditional dish, there are numerous Chile Relleno an Nogada recipes. Some people proclaim their recipe to be “authentic.” Others take a more sophisticated approach. Still others simplify the recipe and tell you it can all be accomplished in an hour (something about which I have serious doubts). Then, there is the constant debate over whether it should be served “capeado” (battered) or merely roasted, i.e. naked. It’s kinda like the debate between cajuns and variations of gumbos (with or without okra) or the disagreement among Texans and the variations on chili (with or without beans).

I have taken a more traditional, “authentic” approach to the Chile Relleno en Nogada. Be forewarned, Chile Relleno en Nogada is not an easy dish and it takes 2 days to prepare. You even have to peel the skins off the walnuts because the skins will impart a slight bitterness to the sauce. Nonetheless, it is well worth the effort. It really is an extraordinary blend of flavors like nothing else I have ever eaten. So, if you’re looking for a festive Fall/Winter meal and you like to play with your food, give this recipe a try. You will be glad you did.

For the Picadillo Filling

For the Walnut Sauce (Nogada)

For the Walnut Sauce

Peel the skins off the walnuts by rubbing them vigorously in your hands. Place the walnuts in a small bowl and cover with milk, roughly 1/2 to 3/4 cup.

Cover the bowl with plastic wrap and place in the fridge to soak overnight.

When ready to serve, pour the milk and walnuts into a blender.

Then the salt and cinnamon

Turn on blender and gradually increase speed to highest setting.

Blend the sauce for 8 minutes at the highest speed. This will liquify the nuts and friction heat the sauce so it will be ready to pour over the rellenos.

For the Pork Picadillo

Step One. Take the pork, whole garlic cloves and sliced onions and place them in a large pot. Cover with water. Place over high heat and bring to a boil.

Once the water comes to a boil, reduce the heat so that the liquid is at a simmer. Cover and allow to simmer slowly for 40 minutes. DO NOT OVERCOOK the pork. You want the pork very tender but not dry. After 40 minutes, remove from heat and allow meat to cool in the liquid.

While the pork is cooling, take the cloves, cinnamon stick and black peppercorns and mill them in a spice mill.

When the pork has cooled, remove the meat, place the liquid into a container and place in the fridge so that the lard can coagulate. You are going to use it in step two. Chop the meat into small pieces.

I did step one the night before when I soaked the walnuts.

When the onions are soft and translucent, add the chopped pork to the pot.

Add, the almonds, raisins, seasonings and pears to the pot.

Cook over medium heat until the tomatoes have broken down and the filling is dry.

Slit a roasted poblano along the side edge. You will need a 1-1/2 inch to 2 inch slit.

Stuff the relleno with the picadillo filling

Gently press on the poblano to ensure the filling is evenly distributed within the relleno. Close the slit, place on a pan with the slit side on the bottom.

Cover loosely with foil and bake in a 350 F oven for 30 minutes to heat through. When done, remove chiles from oven and place on a plate. 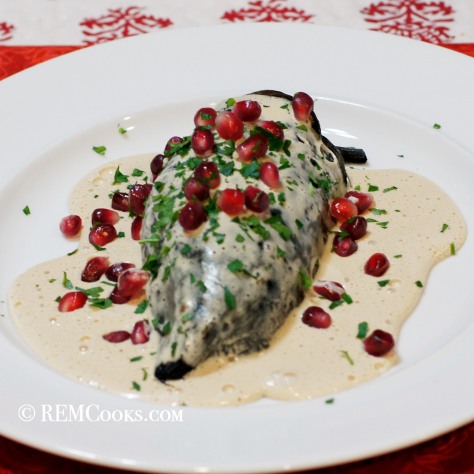