Here is another wonderful meal for the cold weather we are having. Not surprisingly, it’s full of chiles. 🙂 Just make sure you have some cold beer on hand.

This is a very flavorful stew and is not to be confused with carne adovada, a New Mexico staple dish consisting of pork stewed in a sauce of ground dried red chiles and spices. We will be making carne adovada another day. This chile dish is really another version of New Mexico Green Chile Stew except I used the fresh New Mexico Red Chiles I had purchased and roasted. I like fresh red chiles because they have sweetness to them the green chiles do not have. The red chiles, however, typically have thinner skins depending upon how late in the season you buy them. In addition to using red chiles, the cooking technique is different and we used tomatillos and red tomatoes in this one. It also was considerably spicier than the New Mexico Green Chile Stew but that had more to do with the chiles we received. I cried throughout the meal, drank several beers, ate 2 flour tortillas and still licked the bowl clean.

Now, here’s a tip on cooking with chiles, especially chiles you buy from somewhere else. Chiles vary in hotness from season to season and place to place. In addition, chiles will cross pollinate thereby affecting the heat level of some of the fruit on the plant. If you actually know the name of the cultivar and find someone who sells chiles by the cultivar, i.e. “NuMex 6-4,” “NuMex Big Jim,” “NuMex Joe E. Parker,” “Sandia,” etc. instead of simply “Hatch,” “hot,” “medium,” and “mild” you are also much better off because the cultivar tells you more about the heat level than someone’s interpretation. Also, what someone tells you is medium, you may think is hot. Some chileheads are just downright crazy and have no concept of heat. Hell, you might think the mild are hot. Taste the chiles before you cook with them!!!!! In our case, we had ordered 10 lbs of medium red chiles because we wanted some medium heat chiles to go with the green hot chiles we purchased. They apparently shipped hot. 😮 Holy Moly!!! We were all rather stunned by the heat but it was so good, you just had to eat it. Following my own advice, I had tasted the chiles before I started cooking to see how hot they were. They didn’t seem to pack much of a punch so I wasn’t worried. I was wrong! 😦 Whoa Nellie!!!!! Being wrong with something that only requires a few chiles is OK and you will live through the experience. When you’re talking about 2.5 lbs worth of roasted chiles that is one of the primary ingredients and flavors of the dish, now, that is a completely different story!! My chilehead friends would have been proud of this dish. 😀 I was breathing fire all night. Regardless, this dish is very, very tasty and you will like it, especially on these cold nights we have been having. Just make sure to find the right chiles for your own level of heat tolerance. Also, make sure you have a 6 pack of cold beer handy if you make a mistake in your chile selection. 😉

I bought a 4+ lb. bone-in, pork shoulder for this dish. So, the first thing I had to do was debone the pork shoulder and cut it into large chunks. Baby Lady was busy so I lost my handy-dandy, trusty photographer and no one wants to see me butcher a pork shoulder anyway. Keep the bone and fat trimmings because you will want to use them.

Take some of the fat trimmings and place them in a large pot – this is going to make a lot of stew. Fat trimmings may not be as beneficial as olive oil but it sure does help develop flavor. 🙂

Render the fat because you need something to sweat the onions and garlic. Oh, and that shoulder blade bone, toss it in the pot and sear it, too. 🙂 You paid for it. You might as well get the flavor out of it.

After you have rendered the fat and seared the bone, add the meat in batches and brown.

When the meat has browned, remove and add the onions.

When the garlic becomes aromatic add the chopped red chiles

Stir and cook for 2 minutes and add the seared pork back to the pot.

Now, add the chicken stock. You want more than enough liquid to cover the vegetables and meat.

Allow this to cook over medium heat, stirring occasionally, for 1 to 1-1/2 hours until the pork is tender. You want this to reduce and thicken, as well. If it gets too low on liquid either add more stock or water. Now add the potatoes.

Allow to cook another 20 minutes or so until the potatoes are done. Remove the blade bone and adjust seasoning. Ladle into soup bowls, 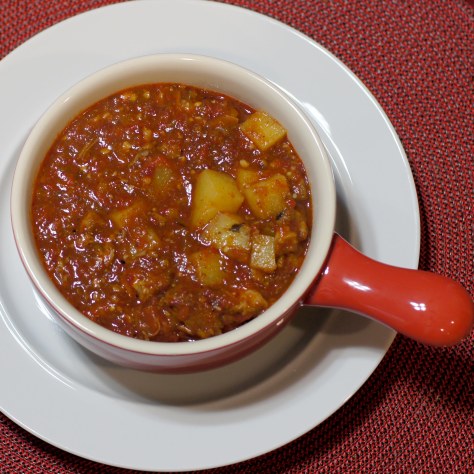