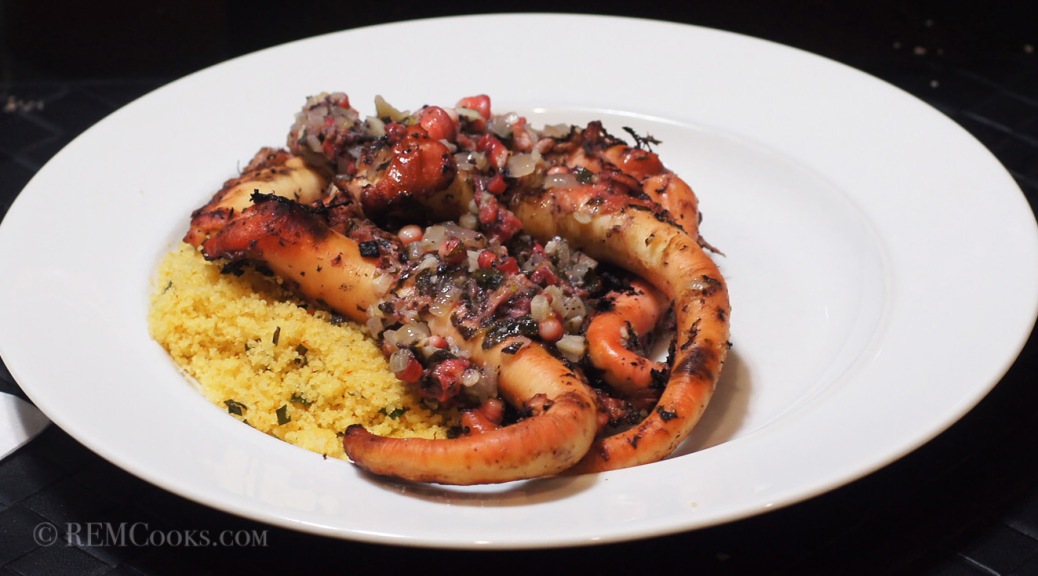 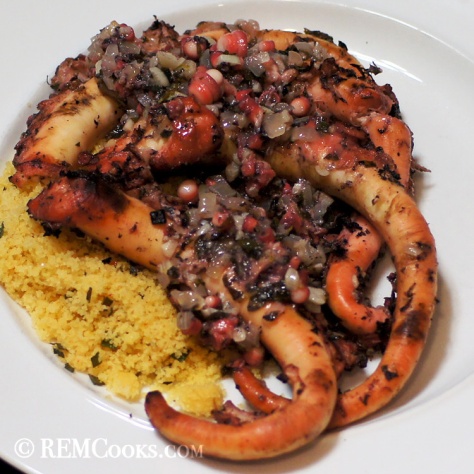 Octopus may not be for everyone but you should at least try it. Its diet of shellfish gives it a mild, delicate flavor that’s slightly sweet. If you like the flavor of a scallop then you will like the flavor of octopus. There are only 2 problems with Octopus. First, its appearance can be off-putting to some folks. Get over it. 😉 Second, if not prepared properly it is tasteless and chewy like rubber bands. 😮 This time I got it right. 🙂

I don’t know about you but I HATE failure. It really bugs me, gets under my skin and irritates me. Sometimes kitchen failures are so bad that I won’t attempt the dish again for quite some time. This was the case with octopus sous vide. For those of you reading the blog for a while, one of the first posts on the blog and the very first sous vide experiment was Sous Vide – The Good and Not So Good. I had been reading lots about Molecular Gastronomy and the Sous Vide technique taking professional chefs by storm. I had also eaten at a few restaurants that employed the technique. I was intrigued by the new technique. How could you not be intrigued? Perfectly cooked proteins some even while you were away at work. All you needed to do was finish it with a nice sear right before you ate unless, of course, it was a poached dish which needed no searing. So, I found a place and bought a somewhat affordable immersion circulator and a chamber vacuum sealer. I’m sure glad Baby Lady loves me and puts up with my toys 😀 but I digress.

Sous Vide – The Good and Not So Good was my first foray into the modern,mysterious world of sous vide. Although the lemon curd turned out spectacular the octopus was a terrible disaster. Given Baby Lady & I seriously love grilled octopus (done right) I was seriously bummed out by the failure. Baby Lady, however, was very gracious in my ruining a meal she so looked forward to eating. I, on the other hand, was soooo bummed out it has taken me 3 years to do octopus sous vide again. Morally devastated would be a good description. I just don’t deal with kitchen failures well (or any other failure for that matter) and this was no different. Humiliated, embarrassed, and mocked by a peculiar piece of electrical equipment with a square flat black head, thermal couple, printed circuit board, rudimentary memory and silly little twirling upside down beanie to circulate the water. I had been bested by a not so smart machine!!!!

Now, I have cooked octopus several times over this 3 year period using the steadfast, time tested and true traditional approach but I just shied away from doing it sous vide. I have also done quite a few things sous vide since that time, too, just not octopus. I couldn’t take the mockery. I could still hear it laughing at me. 😦 Something presumably so simple had gotten my goat. In the meantime I kept reading my friend and sous vide guru Stefan’s Gourmet Blog always jealous with the sous vide masterpieces he produces. Then my blogging buddy Mimi started posting her sous vide treats increasing my sous vide envy and reminding me of my octopus failure. Next. my blogging buddy, King of the Ireland Blogging World, marketing genius and generally delightfully funny guy, Conor Bofin, got a sous vide circulator for Christmas from his eldest daughter – I wish my children loved me as much but that is another story of envy. 😉 Well, being forced to reflect upon the horror of my failure once again I was at that point where “that’s all I can stands, cuz I can’t stands n’more!” 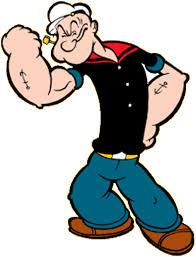 Luckily, I was at my favorite market and they had a beautiful 8 lb. Gulf of Mexico octopus on sale for $4.99/lb. In DFW this is a steal. So, having recently purchased another sous vide circulator on Stefan’s recommendation I set out to conquer this untamed sous vide beast. Success at last and this is what we did.

OK. As always first things first and you have to excuse the lack of photos. Clean the octopus under running water removing the organs, beak and nasty bits – aren’t you glad I didn’t take photos???

Next, cut the ocotpus’ legs off the head into 8 separate pieces – its an  octopus meaning eight feet – and cut the head in half longitudinally (It’s a really big octopus). Now, put the octopus in a food safe, sealable, plastic vacuum bag and add 1/2 cup olive oil and a handful of fresh oregano. Seal and place in the sous vide at 74 C/165 F.

Now, the trick is to let the octopus slowly cook until it is tender. Previously, I cooked a 5 lb octopus at 77 C/170 F for 4-1/2 hours and it was a disaster. So, this time (larger octopus so longer time) I tried a lower temp and cooked it considerably longer – try 8 hours!!! We tried it after 5 hours and it was incredibly chewy – toothsome would not even approach how chewy it was. 😮 One of the nice things about sous vide (as I have discovered) is the ability to open the vacuum sealed bag and check to see if the protein has reached the desired result. 🙂 If it hasn’t reseal the bag and continue to cook. It took a while but after 8 hours the octopus was ready.

Once the octopus is done, add 1 cup olive oil to a skillet

Add the onion and sauté until transparent, roughly 2 – 3 minutes – do not brown

Sauté  for 1 minute until fragrant then add the lemon zest

Remove from heat and add the red wine vinegar

Vacuum seal and allow to marinate for 24 hours.

After 24 hours (or so) grill the octopus over hot coals (a gas grill works, too, but we were out of propane 😮 )

Serve atop herbed couscous and spoon some of the leftover marinade over the octopus. Enjoy. 🙂